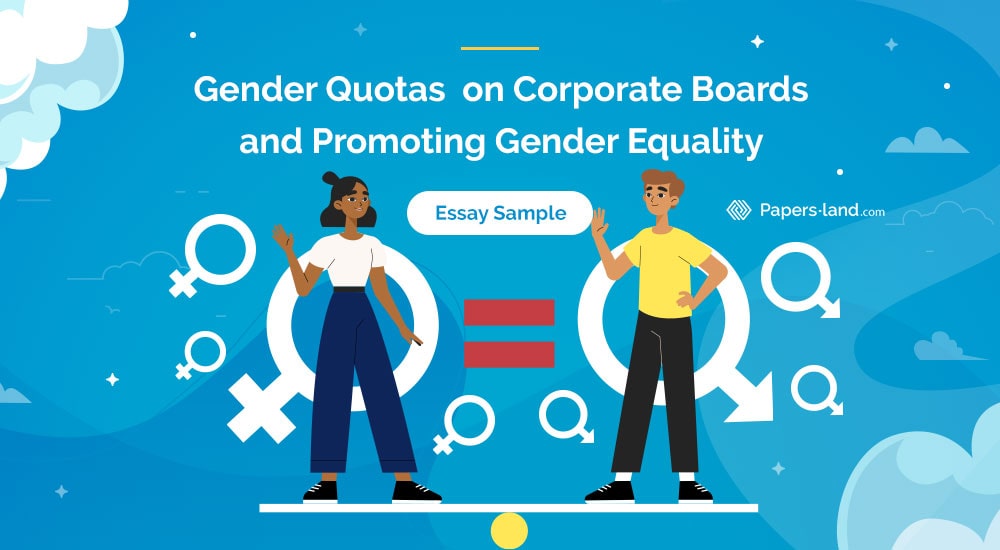 Gender quotas are currently perceived as essential means of gender equality promotion on corporate boards. There is no doubt that the framework of the twenty-first century is filled with a struggle for women’s rights, which are expected to be absolutely equal to men’s ones. Numerous debates on the effectiveness of gender quotas on corporate boards are followed by the necessity to investigate whether they are a successful tool to promote gender equity and empower women. Scholars consider this issue from different points of view, such as productivity, economic profitability, and social and cultural diversity sustainability within a company. The majority of investigators support the fact that gender quotas can establish a necessary balance within an enterprise to lead it to the top of the business world. This argument is effective only in cases if the social and cultural environments of a firm are free from gender biases and are based on harmony in the workplace regardless of the gender aspect. Therefore, the appropriate allocation of gender quotas on corporate boards is the main tool used to promote gender equality because it builds an atmosphere of trust, diversity, and responsibility at the working place.

The majority of investigations within the field of corporate boards and gender quotas share the opinion that there are numerous advantages of the practice since it brings the gender equity aspect and establishes women’s authority making them empowered. According to the investigation by Carli and Eagly (2016), the allocation of enough quotas for women within an enterprise’s corporate board is a successful tool to change the ordinary or accustomed way of conducting business. The authors explain this argument by the fact that women are characterized by a different mind structure and emotional sphere and are more capable of doing the same things in a new way, which is likely to be more productive (Carli & Eagly 2016). In addition, Carli and Eagly (2016) state that the productivity of women is much higher. They prove this fact by the example that if an enterprise possesses at least 20% of female employees, the productivity and profitability indexes get higher at least twofold (Carli & Eagly 2016). It means that due to different ways of thinking, men and women can create a great enterprise if cooperating. Thus, this aspect brings the necessity of gender quotas on corporate boards.

Another argument in favour of the effectiveness of the gender quotas approach in promoting gender equality and empowering women on corporate boards is that it leaves no free space for possible stigmatization. The research works by Abdullah, Ismail and Nachum (2016) and Terjesen and Sealy (2016) prove the idea that imposing gender quotas is helpful in struggling against possible discrimination since they go as a must within the rules of corporate culture and social diversity at the workplace (Abdullah, Ismail & Nachum 2016). In addition to this, the scholars have a strong conviction that stigmatization is one of the most negative and harmful for enterprise processes since it prevents a company from balanced and harmonious development according to the established plan (Terjesen & Sealy 2016). It means that when both men and women tend to cooperate and create conditions necessary for successful work, focus should not be put on gender. Hence, such a way of thinking helps comprehend that to conduct successful activities on corporate boards, there is a sharp need in letting gender equity flourish to empower women. This approach can be successful for both gender diversity and equality within an enterprise and for company’s successful cultural, social, and financial development.

Studies also show that a share of gender quotas on corporate boards is likely to positively impact the working process and critical thinking skills of employees. Thus, the fact of the women’s quota on a corporate board being more than 20% allows perceiving work from another point of view. For instance, it may bring numerous profits in terms of board governance, which are as a rule comprised of increased operational risk management, disturbance of groupthink, more vigorous deliberation, advanced quality observing management, and, finally, more systematic nature of work (Brieger et al. 2017; Sojo et al. 2016). Such qualities are essential when building the working process to achieve the expected aims and results. Furthermore, in case if the gender quota of women on the corporate board is more than 30% – 40%, there are more benefits for the work of an enterprise (Williams et al. 2016). They include the ones mentioned above and comprise such activities as critical thinking of more productive nature, as well as more diverse experience and ways of conducting business. These data prove the fact that gender quotas are not only necessary for company’s prosperity but also for the successful implementation of gender equality and the process of empowering women on corporate boards. In addition to this, it is possible to state that gender equality is tightly connected with company’s prosperity and profitability.

Another argument supporting the effectiveness of the proper allocation of gender quotas on corporate boards is connected with the decision-making process. In accordance with the studies conducted by Byron and Post (2016) and Gregori? et al. (2017), the latter is frequently based on the attitude of members of corporate boards towards each other. Both groups of scholars suppose in a similar manner that if the male group of the corporate board is tolerant to the female one, the decision-making process takes place in an easier way since both are aimed at achieving the profitable and successful result from their activity (which goes without any gender-based biases) (Gregori? et al. 2017). In cases when there are even small gender biases or stereotypes, it becomes more difficult and can lead to undesired consequences and failures (Gregori? et al. 2017). Thus, having gender quotas on corporate boards established helps promote gender equality and empower women to achieve necessary results, which an enterprise aims to achieve. In other words, gender equality at the governing level of the company is likely to bring positive results from work since it performs a constituent function (Byron & Post 2016). It means that gender equity in business serves the role of a hidden tool, which helps achieve expected goals and bring necessary profit.

Thus, having investigated the cons of gender quotas on corporate boards, it is possible to state that the practice of their allocation is absolutely necessary in terms of building gender equality and promoting the process of empowering women. This aspect is of great importance since it performs a foundational function and helps a company achieve necessary results and obtain expected and/or planned financial benefits (Mavin et al. 2016). However, it is also important to pay attention to hypothetical drawbacks that gender quotas can bring to the organization, its corporate board and functioning.

Investigations, which stand against gender quotas, are merely based on the fact that gender biases are nothing else but a fictional result of globalization and female rights movements. Thus, a group of scholars who believe that gender quotas are not necessary base their opinion on the assumption that this term is not worth attention (Mendelberg & Karpowitz 2016). They explain it as a secondary factor, which impacts the work of a corporate board and the whole enterprise (Mendelberg & Karpowitz 2016). In addition to this, this group of scholars believe that gender quotas represent more an obstacle than a benefit for gender diversity because the process of gender quotas allocation requires an additional and more complicated search for human resources. It means that the company loses time and financial assets. Thus, there is no necessity in gender quotas because they do not actually build gender equality, which, in turn, is not an effective tool (Mendelberg & Karpowitz 2016). However, this argument is still not proved to the fullest extent since it does not provide any quantitative data on the fact that gender diversity is worthless for the work of corporate boards.

The paper investigated the arguments in favour of gender quotas’ presence on corporate boards. Essential claims, which prove that gender quotas are the most successful tool to build gender equality in the working place and empower women, are a difference in the way of thinking of men and women and the lack of stigmatization preventing the organization from success. Brand new approaches to the organization of the working process and decision making within the level of corporate boards are also important evidence. These purely managerial aspects serve as a direct prove of the fact that gender diversity, gender equity and women empowerment are necessary tools because they create the desired and positive working atmosphere and lead to the successful achievement of the expected results. The counterargument against gender quotas does not provide any prove because it does not contain any statistical data, which can point to the fact that gender diversity is useless on corporate boards. Finally, it is possible to assume that gender quotas are necessary to sustain and develop gender equality in the working place since it serves as a basis for the success of an enterprise.

Plagiarism in Research Paper: How to Ensure Original Content?
Cyberbullying Attacks on Kids