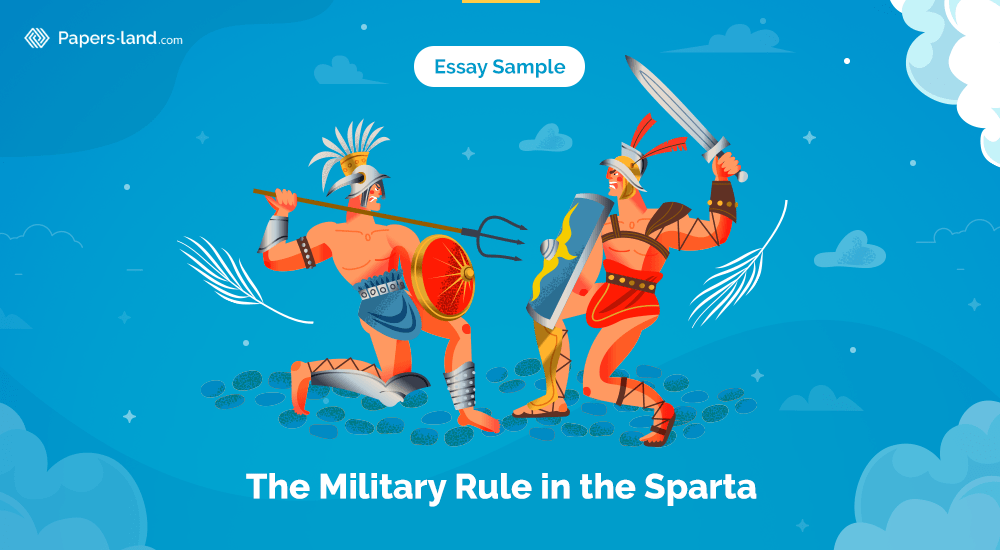 Sparta was an ancient city in Greece. It was one of the most famous ancient cities in Greece of the Peloponnesus, founded at the hills of mountain Taygetus. Most of the citizens in Sparta were militaristic, as described by their enemies, Athens. After the end of the Messenia war, the remaining Spartan people moved to the Taygetus mountains and set up the military government of the Spartans (Kennell, 2010). Since they were almost defeated, they maintained control of their territory through the invention of a new political system by turning their state into a military state. Though this dramatic change was essential in the everyday living styles of the citizens living in the Spartan society. The Spartans instituted strict military controls to ensure safety for the state. It was also supposed to show an impression of a strong military force to scare the enemies.

The citizens in Sparta were not equal. Within the Spartan society, there were three groups of people. There were the Spartan citizens, who could trace their ancestral background back to the inhabitant of the city. This group lived in the city itself and had full political and legal rights. They also had a vote in the rule and devoted their entire time to military training. The dwellers were the second group of the Spartans living in the surrounding villages and were free with no supporting rights. These groups were foreign people, who served the city as a buffer of the population between the Spartans and the helots. The majority of them were tradesmen and specialized in commerce between Sparta and their neighbours. The lowest class was the helots, who were the agricultural bondmen not much better than slaves in their classifications and in the way they were served or treated both in the areas of work and societal being. They were working in small plots of land on estates, which were owned by the Spartans. The part of the products from the land was given to the master of the land and the other part was used by the land worker.

In the Spartan government, there was an odd type of government, but its military rule made it more stable. Due to their military background it had the most stable government in the history of the ancient Greece. The strong military background was also anchored by the rule of the two kings, who headed a dual monarchy in the Spartan government (Hanson, 2005). The kings served as high priest and leaders in times of war. Each of the kings acted as a test out on the other king to ensure that the decisions made are right and are not single person’s ideas. The cabinet of the Spartans was composed of emphors, whose role was to exercise the general guardianship of the laws and customs. The legislative assembly of power of the Spartans was established in the assembly of the Spartan citizens in form of a senate and a council of elders, which consisted of two kings, and other 28 men selected from the group of citizens.

The Spartans wanted to ensure that there was maximum service to the public; therefore, they lived a military life. The military training continued through adulthood and no one was free to live as they choose. All the people believed that all the citizens were the property of the state. If they did not have any duty assigned to them, they had the obligation of watching over the boys and training them something useful (Cartledge & Cartledge, 2003). The military rule in the Spartan society was to ensure that education was given to the women on the dedications to the state. Like in most of the Greek states, women were required to stay indoors. However, the Spartan’s women were allowed to move around since, their husbands were not at home most of the times. Furthermore, the state played an important role in determining the Spartan citizens’ lives and even played the important role in determining, who would die and who would live. From the time an infant was born Spartan government decided their fate. At birth, the state committee inspected the child and if the child was a weakling, the child would be ordered to be left at the hills to die of exposure. Through this, the Sparta aimed to ensure that the only children, who survived were strong and capable of defending their territory.

The Spartans exercised such strict military controls in order to develop a strong army of citizens, who would protect their state from the attack of the enemies. The principles governing the Spartan society, which ensured that all the citizens of the state were the property of the society was to ensure that they earned the loyalty of all citizens. The two kings were to play a crucial role in making wise decisions. The wise decisions would help them in time of war. It was also supposed to create an impression of a strong nation. The Spartan government had tight military role, because it was established on the values that the life of every person living within the Spartan city belonged to the state. Therefore, the life of all Spartan citizen from the smallest to the eldest was treated with a lot of care and needed protection. Therefore, military leadership became the central aspect of the existence of Spartan society.

How to Write a Response Paper: Expert Tips for Students’ Success