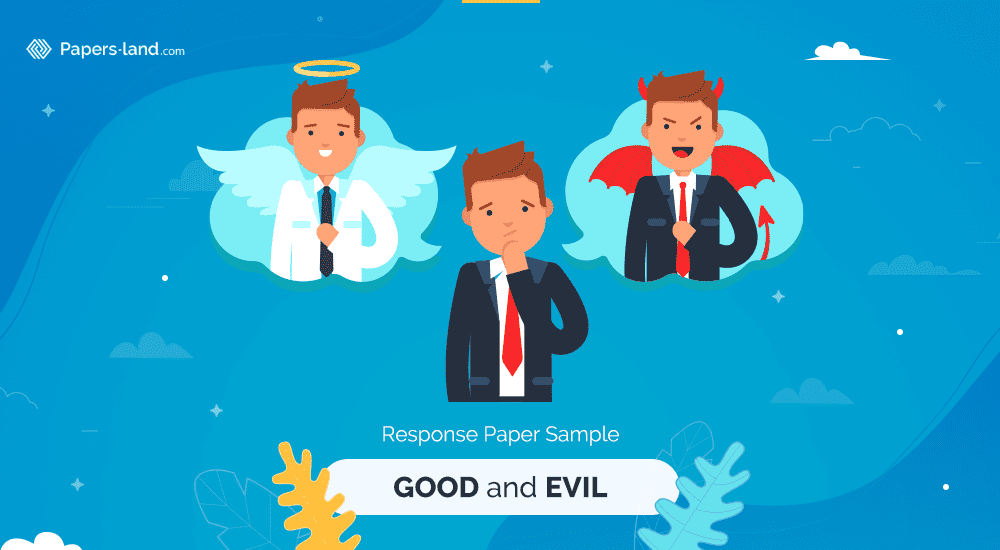 Response Paper About Good and Evil

There are many religions in the world, and there are people who believe in one God, several, or no gods at all. People, who are religious, cannot understand those who do not believe in God and will present numerous examples of God’s existence. On the other hand, atheists will always argue for logic and proof of the absence of God. Hence, the argument about God’s existence is very personalized and must not be based on suppositions, only on logical, factual evidence and critical analysis.

When McCloskey presents his arguments, it is clear that the reasoning is logical and can be understood by the majority of people in relation to the unnecessary belief in God. From one perspective, there can be no guarantee that these reasonings are true, therefore, they might not be taken as the essential explanation and answer to the question of God. As Foreman comments, all that people have to follow is religion and their belief in God. People represent the ending point of an idea or belief, and they chose to believe in God or not (Foreman, n. d.). As a result, if a person decides to believe in any God, he will also consider true the arguments which prove that there is a God. At the same time, someone who worships a different god, in an argument with another person who might try to disprove the existence of a certain God, will choose to ignore the argumentation and consider it false or even unreasonable (Foreman, n. d.).

Another point that McCloskey brings to the reader’s attention is that even though it is impossible to deny that the world exists and people do live in it, the fact that it has come into being does not mean that there has been some entity that has created it (McCloskey, 1968). Evans and Manis write that it is possible for someone or something not to cause the universe, yet there might be an origin. This origin is not focused on the need, but on the physical fact that there must be a cause and effect. Some environmental conditions had to come into existence before the universe developed into its modern form. The cause for that is irrelevant, as it is not necessary to think of why, who, and with what intention has created it. As a result, it is uncaused because no one knowingly and purposefully has used specific materials to shape it into the known world.

The question of the cosmological argument and its seeming proof determines that there necessarily has to be some sort of Being which has created the world and other living things. However, it is obvious that there is no definite answer whether there is one or several of such entities which are capable of creating a universe, the whole existence, or one world. McCloskey refers to the cause as one major event or Being which has put everything into existence, and the author refutes the cosmological argument that this being and the existence of the world prove how this entity is all-powerful and perfect (McCloskey, 1968). Evans and Manis say that a human being knowing about this God would want to learn more about him. It would require a person to know how or where to get this knowledge (Evans & Manis, 1985). But eventually, no one can present evidence of where this information could be found.

At one point, McCloskey writes that in order to prove the existence of the designer of the universe and the whole cause of matter, there has to be evidence of the design, that is, how the all-powerful Entity of God created this perfect universe (McCloskey, 1968). At the same time, McCloskey states that there must be proof of the purpose and reason someone would want to create the universe, world, and all people in it (McCloskey, 1968). It is possible to admit that the author requires a lot from the people who need to prove the existence of God. In case the all-powerful Being was creating the universe, there would be no human plans that might be contemplated by a person. Even when one looks at the design itself, nature, and all the mechanisms that surround the existence of the universe, it would be difficult to see the examples of the design (Evans & Manis, 1985).

It is true that it is difficult to get any indisputable proof that the universe was made by some particular God and, thus, offer some examples of this creation and the design. However, it is possible to argue that the thought-out, extremely compatible, and functional universe is itself proof that there must have been a designer, as it is impossible for something that complicated to come into being by itself. There is no doubt that there is a very intricate mechanism at hand that makes the whole universe function. Scientists might not yet know why and under what force stars and planets begin to form, but it is an undeniable truth that there is a physical mechanism of how they form. Then, the process of the planet-building transforms the inhabitable form into a world that can sustain life. The mechanism of life, production of oxygen by plants, and need for oxygen by humans are extremely difficult processes that can be observed every day. The connection between all forms of life on the Earth and how each life form depends on the other for survival proves that there is a purpose, cause, and design. It might not particularly prove that there is a specific designer, yet it is possible to assume that there is a sense of the existence of all these mechanisms.

As McCloskey writes, evolution is one of the greatest forces of nature and it has been proven in the modern days. This force is so strong and natural that it might quite possibly negate the need and the reason for a God to exist or design anything. One can assume that the nature and universe are one, so evolution is simply a natural process that has existed always. No one had to design anything because this eternal and never-stopping progression of living things into the future has been continuing by itself.

It can be said that if the design of this world is so perfect, well-thought-out, and divine, it would absolutely exclude the existence of evil and the forces which bring negative physical and moral disturbances to people. The same was said by Foreman when he stated that while the world was made so perfectly and when God knew about the existence of everything, including evil, it would be unreasonable to think that He would allow this evil to exist (Foreman, n. d). However, evil itself is not a bad thing, people are the ones who have given it such a negative connotation and tie it to some evil forces which are purposefully trying to destroy humanity. Thus, it is necessary to compare and differentiate good from evil.

When McCloskey writes about how a perfect being would not have allowed or even made evil because that has been the design of everything, the author means that it is reasonable to think that a person, the creation of God, would not be able to think or do evil. It is a fact that people do hurt each other and the suffering exists not because of evil spirits but due to people’s weaknesses and immoral wants. These desires are dictated by a type of character and the need for people to manifest their own wishes, otherwise, life would be difficult for them, as they have been created in such a way as to want these things. Thus, evil does not exist separately from the creator of the world, it is a part of the natural process and must be taken as a given.

Check out our response paper writing service. Here you can get quality help with your paper!

In response to McCloskey’s statement that it is quite possible for God to have created people in such a design that they always would choose to do the correct thing, it is possible to say that this would be a negation of all the needed principles of life (McCloskey, 1968). People are given a chance to experiment and analyze their own mistakes, and society exists to keep this fact in check. If people were given the right and freedom to always do the right thing, there would be no progress and evolution.

In relation to the idea that life as an atheist is better and more comforting than for a theist, William Craig writes that there are many arguments, especially those related to the relief that faith brings. In the end, it is not really necessary to know for sure how the world has been designed, when and what forces have been at hand, the main point is that there is a Being that protects people and listens to their prayers (Craig, n. d.). People will have that comfort to believe in, and so their quality of life will become better, and the mechanism is completely irrelevant.

In conclusion, both sides of the argument present interesting evidence about good and evil. From one perspective, God brings comfort and faith to people, while evil deprives it. Those who believe in God will not lose their faith, while atheists will always have logical conclusions why God does not exist. Overall, it is a personal choice of any human being.