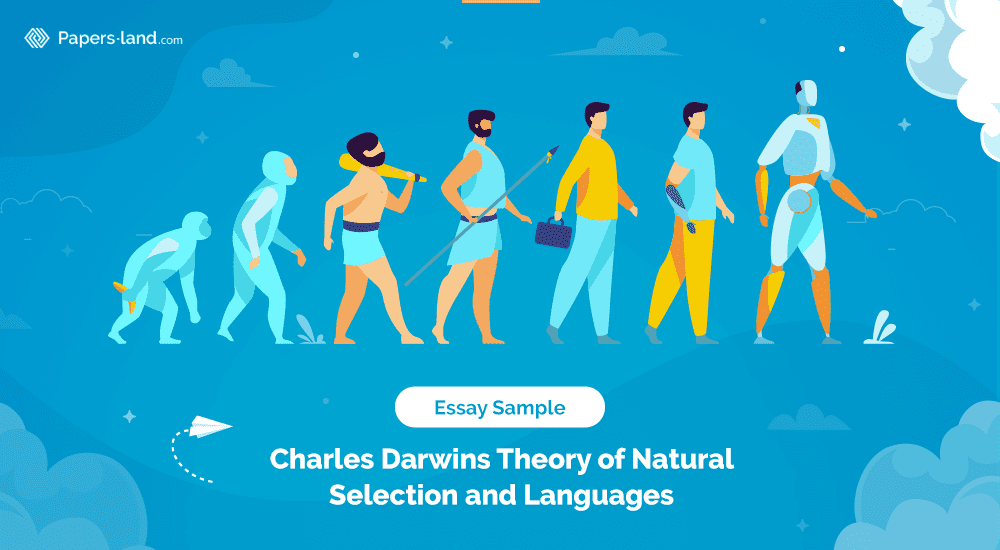 The given essay discusses the theory of natural selection proposed by Charles Darwin and the correlation of its original application with the transference of certain aspects in the domain of linguistics. A number of questions that appear to be the cornerstones of the theory are earmarked in relation to languages and explained from the point of view of their convergence or divergence. In order to correlate the two domains in a better way two types of readjustments were introduced (viewing a language as a separate species itself and in relation to its users).

Charles Darwins theory of natural selection is represented as a slow-acting, benign, unconscious process that rests on the interrelations between the organisms that undergo natural changes. Given the fact that the theory is quite comprehensive in the number of aspects it embraces, its application into the domain of languages is possible with help of several case-specific readjustments. The readjustments are applied in order to simplify and visualize the comparison of two domains organisms and languages. Therefore, there have been two possible ways of viewing languages as species. In the first case the language can be classified as a separate species together with its users. In the second case, the language with its internal structure and organization appears to be a separate species. Both cases present a whole host of applications of the theory, as well as divergences in transferring the theory into the domain of linguistics.

In case a language is united with its users into a separate species, the application of the theory is quite comprehensive. In his theory Darwin claims that there is no distinctive line of demarcation between the species and well-marked varieties, or between lesser varieties and individual differences within one species (Darwin, 1859). The same holds true for the domain of languages if one were to transfer the terms into the field of sociolinguistics. Languages represent separate species, well-marked varieties represent language varieties, lesser varieties and individual differences stand for dialects (social or regional) and idiolects (individual way of speaking) respectively. Similar to the domain of organisms, in the sphere of languages drawing such a line is considered to be quite a subjective process.

Charles Darwin states in his theory that varieties descend from common parents. Moreover, varieties are considered to be species in the process of their formation, or the incipient species. The process is explained with help of the term divergence of character that refers to the fact that the differences between varieties slowly become greater and lead to the formation of two species. At the same time Darwin argues that not all incipient species will necessarily become separate species (Darwin, 1859). A proper example of applying this aspect into the domain of languages would be the case with Chinese. The controversy rests on the question about the speakers of Cantonese and Mandarin, who would not be able to communicate without a shared writing system. There is no clear line to classify Cantonese and Mandarin either into two separate languages, or two separate dialects. If they are dialects, will they ever become separate species, separate languages? According to Darwin, there are the so-called dominant species which appear to be the most flourishing among others. They range widely over the world and stay numerous in individuals. These features help them produce well-marked varieties more often. As each selected form increases in number, the less favoured will become rare. Rarity is a relentless prosecutor of extinction (Darwin, 1859). The correlation with languages is fairly obvious in this particular application. Languages of limited diffusion spoken in the developing economies are less likely to endure as compared to those spoken by a vast majority of speakers in the developed countries. Moreover, Darwin claims that if the country were to open its borders and let in new forms, the latter would disturb the relations of the former inhabitants (Darwin, 1859). Language interference is a common phenomenon in the sphere of sociolinguistics. Languages tend to acquire the aspects of other languages when placed in close contact with them.

According to Charles Darwin, even if the changes in the conditions of life are negative, the variability will increase and will always be favourable (Darwin, 1859). I believe that this aspect cannot be applied, as languages tend to prosper and acquire beneficial variations if they reside in a favourable environment that fosters their evolution.

In case of the second adjustment, when a language is considered to be a separate species by itself, the application of the theory is quite extensive. The theory states that potentiality for change is inherent in each individual and variability occurs even in case of important parts of structure (Darwin, 1859). The changes in languages will never cease to happen in their evolution. In general, lexical level succumbs to new items easier than grammar, and this is largely connected to the necessity to coin new lexical units to keep up with the paste of evolution. The level of grammar is of vital importance for the internal structure of language. Even though the changes are slow, they still take place.

There are a number of points in the theory that cannot be applied to languages. According to Charles Darwin, the essence of natural selection is based on no standard scheme and no virtue is involved into the process of developing features. It is a sorting process that favours individuals most adept to the environment (Darwin, 1859). On the other hand, in one of his works, Roy Harris talks about Jakob Grimm who offered the theory of the Grimms Law. The latter demonstrates a systematic correspondence between Greek, Gothic and Old High German concerning the consonants of etymologically related lexical units. Moreover, in his Lectures on the Science of Language, Max Muller argues about the fact that general notions in language are not formed at random but rather according to rigid laws and systems (Harris, 1997).

The entire concept of natural selection is based on preservation of favourable variations and rejection of injurious ones (Darwin, 1859). The statement is not fully applicable to the organization of languages. In particular, language change on a lexical level is not always beneficial and might adversely affect the structure of language with borrowings and internationalisms, etc. This especially holds true for the supporters of language purification, and might be deemed somewhat subjective.

The theory of natural selection by Charles Darwin can be applied successfully if certain readjustments are performed for visualizing the two domains and their correlation. The brightest points of correlation are represented by the absence of distinct line of demarcation (species vs. variety; language vs. dialect/variety), divergence of character, species interaction and language interference, variability among important elements of structure. The theory fails to be applied in the statements that unfavourable environment creates beneficial variations, idiolects can grow into languages (individual differences give rise to variability), language change is an unsystematic process, negative variations are not acquired by languages. The possible application points and the aspects of divergence mentioned above might be considered subjective, as both systems of organisms and languages are dynamic in their nature, and cannot always be subsumed under rigid categories and theories.