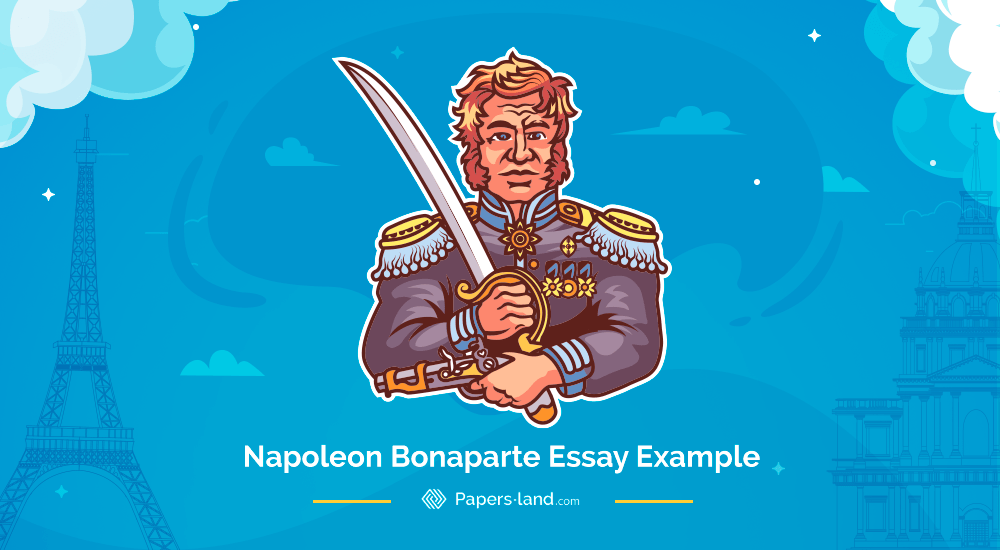 Napoleon Bonaparte is one of the famous military leaders in the world. His military skills have been studying at educational establishments all over the world. Napoleonic Wars are described in many books and translated into almost all world languages. At the same time, many historians discuss Napoleon’s qualities as a military leader. Some of them consider him as a military genius, referring to his commands in the battles, his leadership and charisma. Others consider Napoleon to have many gaps in the strategic thinking. They believe him to be a skillful improviser of the more talented predecessors, who was unable to plan future campaigns. Moreover, they consider Napoleon’s eventual defeat as a result of his personal mistakes and short sightedness. Others consider his personal life to affect greatly his professional life in the military. They believe that Napoleon would have never been the great military leader if he lived as a common military officer. They consider Napoleon to gain success because of his relations with the right people. Therefore, the goal of this paper is to reveal some facts from the life of Napoleon for analyzing his influence on his further military career and the influence of this person on the further development of armed forces.

As Napoleon states in his biography, “My career has been so astonishing that my admirers have thought to find something extraordinary even in my infancy. They are mistaken. My early life indicated nothing at all remarkable.” He went to school at age of ten. Napoleon was the smallest boy in his class. Moreover, he was a Corsican, and his classmates bullied him for it. However, what he lacked in a physical size he more than made up in a sheer drive and determination. Soon he became the best pupil in the class. Since it has been called as a Napoleonic complex. Then Napoleon continued his education at French military schools. He had a strong will and decided character, which helped him to master the school subjects and improve himself. Mathematics and history were his favorite subjects, as Napoleon states, “the former develops genius, and the latter regulates its action.” As he had a quick and clear spirit, he could learn anything with ease, and he had time for thinking about things, which were not interesting for his classmates.

The first appointment of Napoleon to the army was in 1785. He was a lieutenant of artillery and was very proud of his military rank. When the Revolution began, Napoleon went to Corsica. He was a friend of the famous activist for independence of Corsica Pasquale Paoli. Napoleon was taking place in fighting between various political forces in Corsica respectively to his benefits. Finally, Napoleon became a lieutenant colonel of the Corsican militia. Then, Napoleon returned to the regular army and gained the rank of a captain. He broke off with Paoli; and, in July 1793, Napoleon became a friend of Augustin Robespierre, a brother of the famous revolutionary Maximilien. Then, he became a commander of the artillery because he had very famous friends. He developed a plan to seize Toulon and implemented it. In result, Napoleon became a general of brigade. He was twenty-four at that time and became a commander of the artillery of the French Army in Italy. Thus, Napoleon was a very skillful strategist on friends. In winter 1794, Napoleon was engaged in fortifying the Mediterranean shoreline.
In 1795, he was sent to the Army of the West. It took place in the War in the Vendee. He was engaged to Desiree Clary, a sister of his elder brother’s wife. Desiree was from a rich merchant family. Napoleon did not want to fight in the War on the plea of the poor health. Hence, he was struck off the list of generals on September 15. On October 3, royalists made a riot against the National Convention. Paul Barras ordered Napoleon to defend the National Convention. Napoleon with a young officer Joachim Murat organized the defense. On 05 October 1795, the royalists were defeated, losing 1400 men died. After that, Napoleon became rich and gained fame. Furthermore, Murat became his relative, marrying to Napoleon’s sister. Then, Napoleon canceled the engagement to Desiree Clary; and, on 09 March 1796, he married Josephine de Beauharnais. She was a widow at that time. Furthermore, Barras was her lover in the past. Thus, Napoleon found new right people to make friends with.

Two days passed, and Napoleon went to Italy. In May 1796, soldiers began calling Napoleon as “a little corporal”. His personal charisma influenced deeply on his subordinates. Napoleon gave lessons on artillery skills during the battle of Lodi at that time. Soldiers liked the brave corporal and made their best to become courageous and skillful warriors. It was a successful invasion. In result, Napoleon defeated Austrian troops and seized Lombardy. In March 1797, Napoleon forced Austria to conclude a peace treaty. During his war actions, Napoleon invented new tactics using artillery for supporting the infantry. Napoleon concluded, “I have fought sixty battles and I have learned nothing which I did not know at the beginning. Look at Caesar; he fought the first like the last.” Thus, Napoleon was turning into a public leader from the talented commander. He developed an espionage network to deceive the enemy. Napoleon concentrated his main attacks on the weakest points of enemy troops, hiding the location of his troops. As Napoleon stated in his appeal to the soldiers, in fifteen days, his army gained six victories, got twenty one enemy banners, fifty cannons, 15 thousand captives, and killed or wounded 10 thousand enemy soldiers. In spite of everything, the French soldiers “gained battles without cannon, crossed rivers without bridges, made forced marches without shoes, bivouacked often without bread, republican phalanxes alone are capable of actions so extraordinary!” Thus, Napoleon not only used the new methods of conducting war actions, but created a new European army by transferring his experience into the military life. As it has been mentioned above, the Napoleonic complex in the childhood turned young Bonaparte into one of the best pupils. Owing to his vivid mind and striving for learning, Napoleon became one of the famous leaders of the 18th century. In result, he took up the French army into his hands. Afterwards, Napoleon turned the old royal army into the army of honor with the help of his officers. It was the paternalistic army with a strict discipline, a military culture, and its powerful masculine icons. It was achieved with the complex motivation system, which had been implemented by French officers in their troops. “The leadership of competent and paternalistic officers… contributed to the sustaining motivation of their troops by helping uncertain recruits adjust to the stressful environment of the army.” Therefore, the French officers instilled in their soldiers feeling of a military duty by their own actions and the soldiers “who did not regard cause, country, comrades, or commanders as sufficient reasons to risk life and limb did submit to the threat of punishment.” Therefore, the military culture, a complicated system of motivations and punishment, as well as a feeling of soldier’s brotherhood formed the national identity in the former French peasants. Moreover, former French soldiers possessed striving for education, public activity, and policing. They gathered to celebrate new holidays like Napoleon’s birthday, the entry into Moscow, as well as the date of Napoleon’s death.

Napoleon “defined honor as the desire for prestige and status that was traditionally associated with the French aristocracy, and the exercise of absolute monarchy.” In order to transform the old French army into the army of honor, Napoleon developed a system of various rewards like promotions, establishing the Legion of Honor and various titles, wishing to become a French absolute monarch. As Lynn insists, Napoleon “replaced the Revolution’s admirable emphasis on self-sacrifice with the self-interested desire for personal fame and aggrandizement.” Therefore, Napoleon could not but became a French Emperor. On 2 December 1804, Napoleon was crowned as the Emperor of France in the result of the November plebiscite. After that, he became the King of Italy and gave the rank of Marshal to 18 of his most devoted to him generals in order to eliminate the danger of any future military riots. Thus, Napoleon turned himself in a monarch from a military leader. He continued giving various noble titles to his numerous relatives, creating a hierarchy of his family. In order to be closer to European monarchs, Napoleon divorced with Josephina and married Marie Louise. She was an Archduchess of Austria, a relative of Marie Antoinette. McLynn stated that it was a marriage into a German royal family. Thus, Napoleon created a legal French monarchy from the French Republic. Moreover, he wanted to have a rightful heir and to have Austria as his ally in wars for the world.

Having analyzed Napoleon’s career from his childhood, it is necessary to make the conclusion that he used his relations with influential persons for rising from the ranks. From the very beginning, Napoleon understood that in order to gain success, it was necessary to study and then use the knowledge. He developed analytical thinking and became the best pupil and the best military leader. Napoleon changed his political views. He was a Corsican nationalist, then became a French republican and finally turned into an absolute monarch. According to this, he used his relations with the Corsican nationalists and friendship with Paoli and became a lieutenant colonel of the Corsican militia. After that, Napoleon returned to the regular army in the rank of a captain and using the friendship with a young brother of the famous French revolutionary Maximilien Robespierre he became a commander of the French artillery. Afterwards, he gained a rank of a general of brigade. After refusing to take part in the War in the Vendee, Napoleon became a corporal. He had to gain a general rank in the military service, but his civil wife Josephina helped him to become a general through her relations with influential persons. Moreover, Napoleon had to cancel his engagement with Desiree Clary. Finally, Napoleon turned into an absolute monarch and married Marie Louise, a niece of Marie Antoinette and a relative of German and Austrian monarchs. At the same time, he was a very talented military leader. He invented some new methods to conduct war actions. Furthermore, he could use the weak points in enemy armies to gain the victory. At the same time, Napoleon could not conquer Russia because he did not take into consideration a Russian strategy based on Scythian military traditions while conducting war actions against Persians.