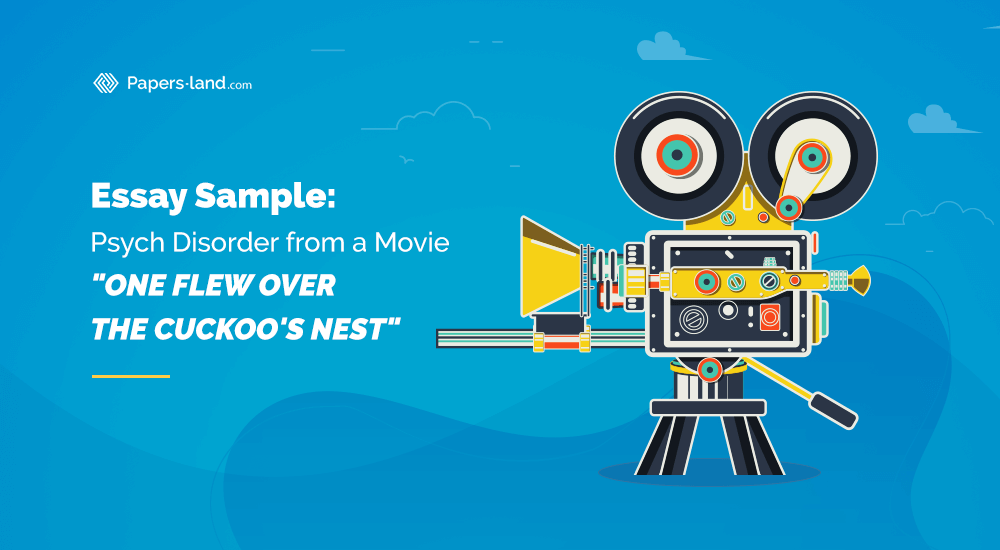 One Flew over the Cuckoo’s Nest can be assumed as an example of a movie, which depicts a person with a mental disorder, represented very close to reality. A character chosen for the analysis is Chief Bromden, as he is a personage with a real problem, and his storyline is highlighted well enough to make some conclusions. This movie presents the viewer with a full spectrum of the information, needed for the diagnosis.

One Flew over the Cuckoo’s Nest

One Flew over the Cuckoo’s Nest is a comedy-drama movie directed by Milos Forman, and based on the adaptation of the eponymous novel by Ken Kesey. It is a story of a human mind which is told through the depiction of different people with their peculiarities, who are held in a mental asylum. Chief Bromden, one of the supporting characters of the movie, is portrayed by the author and played by Will Sampson so well, that he will be used to analyze a psychological disorder he depicts in the film.

One Flew over the Cuckoo’s Nest highlights the troubles of life in the mental institution based on the perception and attitude toward those, who suffer from mental disorders. Thus, this movie depicts the misconceptions in ways of treatment of patients and the conditions in which they live. As a result, this film can be used to identify the psychological disorder of one of the characters.

The movie tells the story of Randle McMurphy, who simulated insanity hoping to avoid prison, and who gets to a psychiatric clinic, which is the realm of a cruel nurse Mildred Ratched. McMurphy is amazed that other patients are resigned to the status quo, and some even came to the hospital voluntarily, hiding from the scary outside world. As a result, he decided to revolt. However, his revolution ends with the lobotomy. Chief Bromden, who was also one of the patients and who killed McMurphy in order to free his spirit, saved his freedom. Almost all scenes of this movie were shot in the department of Oregon Mental State Hospital. Critics praised the director and actors’ game, recognizing One Flew over the Cuckoo’s Nest, as one of the most important examples of the “new wave” of American cinema of the 1970s. For this reason, the hero of this movie, Chief Bromden, was chosen for the analysis of his psychological portrait.

Chief Bromden was selected as the main research subject in this paper. He is a supporting character; however, his impact is present through all of the movie as he is a recurring personage. Bromden’s father was the leader of a small Indian settlement. He was made a drunkard by white people, who wanted to buy the land of his tribe. Bromden lived a normal life, played college football, but slowly, being unable to withstand the pressure of society, which had destroyed his father, he began to withdraw into himself and was taken to the psychiatric hospital. It was a domain of the nurse Mildred Ratched, who had established strict rules and broke everyone who did not accept them. The whole world seemed for Bromden a huge corporation which rebuilds all people, making them behave in the socially accepted way. Psychiatric clinic was a miniature copy of such a corporation.

The temperament of Chief Bromden can be characterized with the dominance of the personal traits inherent in melancholic and phlegmatic people. In other words, he can be described as an individual with increased excitability, heighten reactivity and medium activity, medium severe emotional excitability and introversion. Chief’s personality can be characterized with the following volitional qualities: high self-control, high suggestibility and suggestion, average self-sufficiency, and lack of initiative; however, he is quite emphatic (Roach, 2000). The manifestation of emotions of the character can be explained with moderately expressed lability and pessimistic mood; he demonstrates cheerfulness and love for life only in the situation of freedom from oversight. Intelligent features of Chief Bromden are apparent in his resourcefulness, ingenuity, and curiosity. In relation to himself, this personage shows such traits as rigor, self-confidence and inadequately low self-esteem (Larsen & Buss, 2008). Thus, it should be assumed that Chief Bromden manifests the signs of schizoid type of character accentuation. With regard to the motivational sphere of the analyzed person, along with the need for security and certainty, most urgent need for him is the confidence in the future, acceptance, belonging and love (Mahaffey, Watson, Clark, & Kotov, 2016). The dominant motives Chief Bromden’s activities are a desire to avoid failure and rejection of the motive. Variability of emotions and feelings is moderately expressed. Thus, it should be stated, that this character was depicted as close to reality as it was possible.

Don't let plagiarism get into your writing

Psychological analysis of the life and deeds of Chief Bromden leads to the following conclusion. In his childhood, the character was exposed to several psychological traumatic experiences: the loss of his grandmother and the collapse of his father’s tribe. In addition, he participated in the military conflict, which was a factor leading to psychological trauma as well. The long stay in the hospital also had a negative impact on Bromden’s personal development. As a result, there formed an inferiority complex, adversely affecting the development of the individual, causing the state of anxiety, inadequately low self-esteem and self-doubts. The way for partially overcoming these problems was humility and acceptance of his role. The appearance of Randle P. McMurphy greatly affected the life of Chief Bromden. The latter communicated with this new person and followed his behavior as an example, which, along with the high suggestibility of Bromden, eliminated his state of frustration and soaring in fantasy, and allowed the hero to realize his self-sufficiency and mental health.

It can be assumed that Bromden had posttraumatic stress disorder (PTSD) – a severe mental condition that occurs as a result of a single or repeated traumatic situations, such as participation in military operations, severe physical injury, sexual abuse, or the threat of death. PTSD is characterized with a group of symptoms such as psychopathological experiences, avoiding or loss of memory about the traumatic events and a high level of anxiety, which can persist for more than a month after the trauma (Dekel, Solomon, & Ein-Dor, 2016). During World War II, it was believed that high air pressure which was a result of the bombings is the cause of the actual physiological damage that leads to a number of symptoms, which were often referred to as “concussion” what was the object of psychiatry. Post-traumatic stress disorder usually develops within the first six months after experiencing psychological trauma. However, symptoms may not appear immediately after traumatic events, but many years later. It is difficult to understand what traumatized Bromden, but with some symptoms demonstrated by the discussed character the presence of PTSD can be assumed. The reason for this assumption is a number of indirect indicators. First, PTSD manifests itself through intrusive recollection of traumatic events. In this situation, the stress, which the patient experiences, is often very intensive, and sometimes even causes suicidal thoughts as a mean to stop the attack. It is manifested in hallucinations and reticence of Bromden. Second, repeated nightmares and involuntary memories. Demonstrating this symptom, patient strongly avoids any thoughts, feelings or conversations associated with the trauma, as well as the activities, places or people that are trigger for those memories. Typical psychogenic amnesia, during which the suffering person is not able to recollect traumatic events in detail, can develop. Bromden manifests it in antisocial behavior and the limitation of contacts with others. Third, constant vigilance and expectation of danger is also a symptom of PTSD (Haller, Myers, McKnight, Angkaw, & Norman, 2016). Bromden manifests it in distrust of the medical staff and the sharp change of direction of the person in front of them.

Creative team did an accurate job with portraying Chief Bromden’s disorder. He actually looks like a person with PTSD, who have been mistreated. It can be seen throughout the entire movie. The character maintains the common sense in order to survive in the cruel world of the mental asylum, but the manifestations of the trauma from the past in form of the insularity and rare hallucinations are a basis for such a diagnosis.

As a conclusion, it should be stated that Chief Bromden is a person who is in real difficulty, experiencing real problems with the self-realization of his personality, but he is closed for the help of a psychologist. Being in a state of humility, he sees no way to solve his problems. His behavior indicates the presence of psychological trauma, which could cause PTSD, which is the main reason for his personality disorder. Thus, Chief Bromden’s identity would need to be studied in more detail, but not in the mental clinic, which only worsens his condition. For this purpose, it would be much better to use the rehabilitation centers for the veterans. However, in the time period depicted in the movie, such institutions did not exist. In that historical period, the whole system of mental care was not ready to find the ways of coping with PTSD and identify in which terms it should be treated – in terms of psychology, psychiatry or both. As a result – the level of suicides among the veterans of World War II and the Vietnam War was very high.